From GoPride, “The 51st annual Chicago Pride Parade marches through the city’s Boystown neighborhood with the annual parade steps off at noon on Sunday, June 26, at Montrose Avenue and Broadway in the Uptown neighborhood. The parade winds (map) its way through the north side of the city, ending near the intersection of Diversey Parkway and Sheridan Road in Lincoln Park. Pride Month in June highlights Chicago’s vibrant LGBT community. The energy in the city peaks on Pride Weekend, which traditionally falls on the last weekend of June each year to commemorate the Stonewall Riots.

More after the photo – 2019 Chicago Pride Parade, photo by Steven Koch for GoPride.com 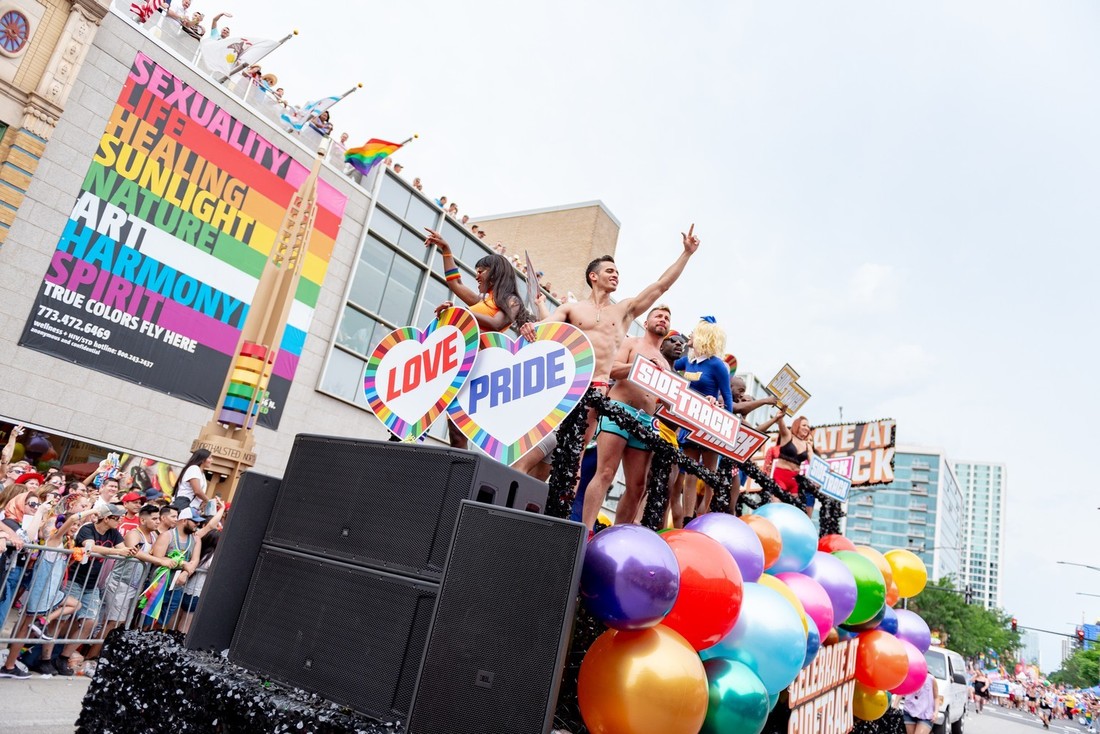 The annual parade marks the uprising, outside New York’s landmark Stonewall Inn, which began the Gay Rights Movement. During Chicago Pride Fest the weekend prior, stages of music, exhibitors, great food and drinks will be available to enjoy. In the evening the revelers will pour into Boystown clubs and party into the wee hours of the night.

The roar of the crowd heralds the start of the Pride Parade, a dazzling cavalcade of diversity. The streets are lined 30 – 40 people deep in spots as over 1 million people cheer the contingents on and enjoy the show, culture and experience! For the liveliest viewing spots head to the Boystown section of North Halsted Street, between Belmont Avenue and Grace Street. If you are seeking a less crowded area to view the parade, look for your viewing spots north of Irving Park Road, along Broadway or further along Broadway between Belmont Avenue and Diversey Parkway.

> View the parade route and map
> Parade entries; how to enter (float or marching contingent) the Pride Parade
> Viewing, dining and other tips for Pride weekends

Events: Pride in the Park

Pride in the Park will be back Saturday, June 25 and Sunday, 26 – with and incredible all-star lineup.

The inaugural Pride In The Park, held June 2019 in Grant Park in downtown Chicago, drew about 5,500 attendees. After being cancelled in 2020, Pride in The Park returned as a two-day festival in 2021 with over 30,000 attendees. NO PARKING:
Both the assembly area and parade route (including the wrap around streets to the first alley) will be posted with temporary signs indicating “NO PARKING ON SUNDAY JUNE 26th, FROM 5:00 a.m. TO 8:00 p.m. Both sides of the street, unless otherwise indicated.” – 8:00 pm is the estimated time for the ‘No Parking’ signs to be removed.  Due to the volume of vehicles involved, the issuing of parking citations and towing will begin promptly at 5:00 am on the 26th. Parking restrictions will be in effect throughout the area so drivers are urged to read signage before parking. To locate a towed vehicle, call 3-1-1. Here is the updated list of impacted streets:

STREET CLOSURES:
Residents, attendees and participants should anticipate street closures as early as 8:00 a.m. for participant staging areas and parade route closures beginning as early as 9:30 a.m., or as the crowd dictates for safety issues, including Montrose, Irving Park and Wellington at Broadway and Addison, Grace and Roscoe at Halsted. There will be rolling closures along the the parade route until the entire route is closed down by 12pm. Streets are expected to fully reopen by 8:00 p.m. or when deemed safe to do so.

All bus routes in the vicinity (except #146 Inner Lake Shore Drive/Michigan Express) will be rerouted. Please check the alerts on the website at transitchicago.com/alerts/

PEDESTRIAN CROSSINGS
Safely cross the event at the following locations:

RIDE SHARING RESTRICTIONS
Below is a map of restricted areas near the parade that you will not be able to call an Uber or Lyft to from 2pm – 7pm the day of the parade. Please plan to take public transit to and from the parade if possible.

One thought on “Pride parade information for 2022”